Problem: VANOS reference position is close to the “left” border mark. The situation usually doesn’t improve even after replacing the chain or repeated mechanical setup of VANOS and camshaft. Here would be an appropriate place for remark, that such a situation is very common for these engines. Usually, the VANOS reference positions of these engines are very inaccurate, the camshafts are moved “to the left”. I haven’t seen any N42/N46 series engines, for which the VANOS reference would be moved “to the right”. It seems, that even BMW (or the developer of DME – Bosch) has noticed the problem. Unlike the Siemens DME, for which the allowed deviation is +/- 10 degrees, the Bosch DME allows the deviance of +/- 11 degrees from an ideal position (till the red mark), and in addition, it allows around 3 .. 4 degrees till position, since which the error message is recorded. There is no doubt – such a “tolerance” is not without a reason.

In the exact situation after repeated setup of the VANOS positions, the improvement of the situation was not relevant: both VANOS reference positions moved several degrees to the “right” direction, the exhaust VANOS position reached the border mark. VANOS positions were checked for several times – no slightest doubt, that mechanically the engine was mounted correctly.

To make sure, that the dispersion of sensor parameters is not one to blame (of course, the sensor can not create an error of 10 .. 11 degrees, but – to find out, if the sensors are creating deviance of at least several degrees), sensors have been changed by places. No changes.

Leaking valves would have moved the VANOS reference position “forward”, so – the leaking of valves cannot be the reason for this “negative” offset. But, to make sure, that the inlet VANOS valve is not leaking for a little bit, the valves also have been switched by places. No changes.

The rings have been magnetized? It is clear, that they can not create the problem of 10 .. 11 degrees, but several degrees? No, the replacement of the rings also didn’t improve the situation.

Where does the cause of the problem hides?

Self-evident – each hub has a certain freelance, including the tool, which fixates the crankshaft; the camshafts, and the VANOS mechanisms (in released position) itself. In addition, the diameter of the camshafts in the fixing place is relatively small – even as if tiny freelance creates a large angular error.

Why these freelance movements have such a negative impact on the result?

The engine turns clockwise, “to the right”.

In the image: the turning direction of the crankshaft and camshafts marked with arrows.

How do the VANOS works? By higher RPM of the engine, the camshafts are turned “to the right” even more, ahead of the crankshaft. It has to be done because of both – output of the exhaust gases from cylinders and inlet of the fresh air in cylinders – takes a certain time. 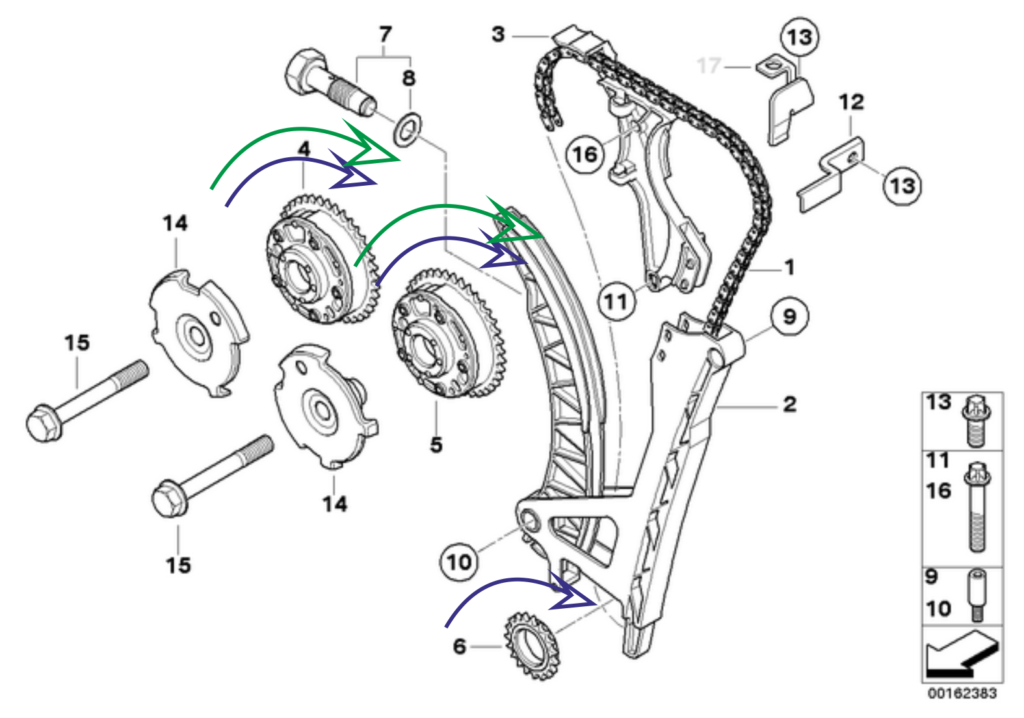 In the image: the turning direction of the camshaft, when the VANOS is activated, is marked with a green arrow.

When the RPM of the engine increases, this time reserve reduces. If the camshaft is turned “earlier”, it earns more time to “empty” and “fulfill” the cylinders.

So: at the moment of the setup of the VANOS position it’s “to the left” on max – max “late”. It’s ensured by the springs and blocking shafts, included in the VANOS mechanisms.

At this moment we have reached the essence of the problem.

The camshafts during timing regulation procedure are fixed in the initial positions with a special tool (it’s mounted on the back of the shafts on the engine unit, behind the cylinder No.4). Also, the signal rings are fixed. According to TIS, the camshafts have to be tightened by a force of 20 Nm, then additionally 90 + 90 or 180 degrees. The camshafts have a “regular” thread, it means, the tightening is done “to the right” – clockwise. So – the camshaft and the VANOS mechanism are tensioned on the direction of the “overtaking”! Instead, while the engine runs, the tensioning is in the opposite – “to the left” – direction, because the camshafts have rolling friction (the friction works opposite the rotation direction of the engine). 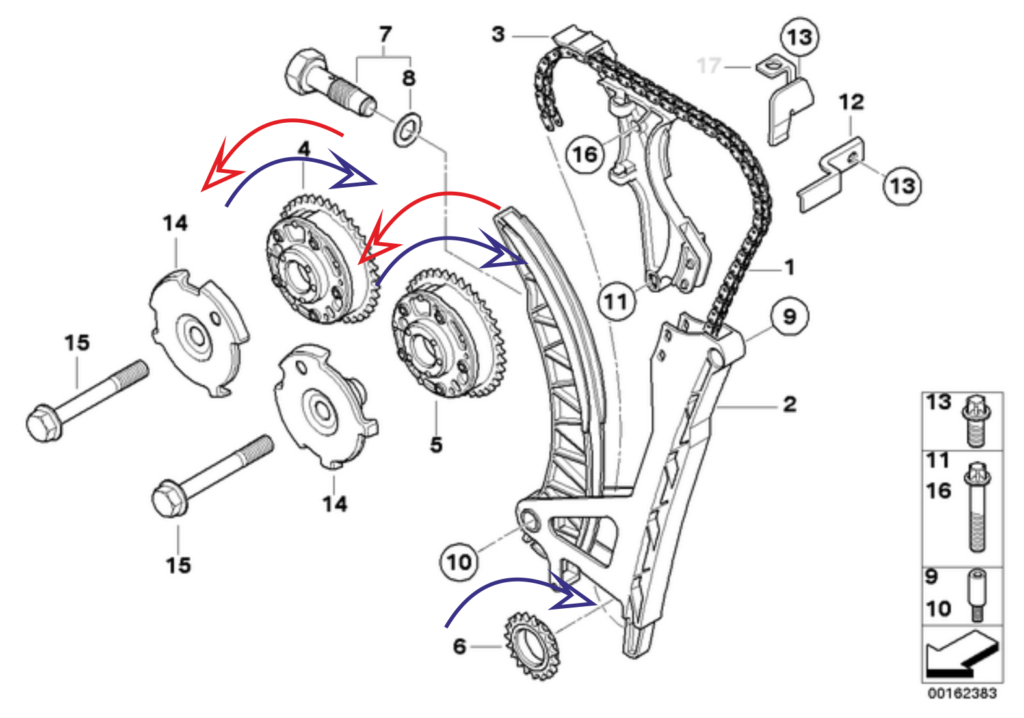 a) the force applied to camshafts and the VANOS mechanisms during the setup of the reference positions (at the moment of tightening of the screws), marked with blue arrows;

b) the direction of the movement of the camshafts while the engine is running (due to the impact of the friction’s force, applied to the camshafts, goes in the opposite direction) is marked with red arrows.

So – the freelance of the camshaft mechanism and the VANOS mechanism itself are working in the opposite directions during the setup of the VANOS and during the running of the engine! This is the cause, why such (large) difference of reference position from the ideal position appears!

Yes, of course, the Bosch engineers could foresee such deviance (some average freelance of 5 .. 10 degrees) and include it in the software of the DME. Unfortunately, it hasn’t been done.

Each mechanic can choose a solution for this problem at his discretion – in my opinion, the key is to understand, where hides the cause of the problem.

What is the difference between NOXEM NOx emulator and OEM NOx sensor?

What are the main differences between NOXEM emulator and ‘’usual’’ emulators?

Is NOXEM safe for my car?…

Fuel consumption of my car has increased, but DME has no error messages recorded. Where could be the problem?

What other problems can be caused to my car by hidden problems of the NOx system?

Are there any ways to see the “health status” of the NOx system?

Oscilloscope. Which one to buy?

The lifespan of the CO converter

Damages of the Lambda probes

Aging of the Lambda probe

Re-adapting of the automatic transmission

Problems with oil pressure. How to act?

The problems of the injectors and misfires

Why Stratified charge is so important

”Disprogramming” of the NOx system

How to use test module of the Lambda probes

How does DME manages the fuel mixture

MSD87. Management of the ignition coils

Importance of the service procedures

Importance of the service procedures. Part 2

Another excellent car from USA

Defect of an injector. Or not?

How to check CCV. Part 3

A present from USA

Why to perform Online diagnostics?

Is the iCOM an iCOM?

Microparticle in the injector

Do I need to replace all injectors?

Air mass meter. To clean it or not?

Injectors. Replace or not?

Attention! Encoding of the injectors

Why there is no error message?

Typical situation in case of damage of the NOx sensor

Long cranking? Or not?

N52B30. Problem with a regulating probe

How NOT to encode the injectors

Valvetronic. Guilty or not?

Re-adaptation of the engine

Buying the car by a photo

The story of an injector

Closed loop system. What does it means?

NOx converter – to be or not to be?

Washing of the windshield

Misfire detection algorithm and its fails

Why diagnostics, performed by dealer, fails

Once again about adaptations 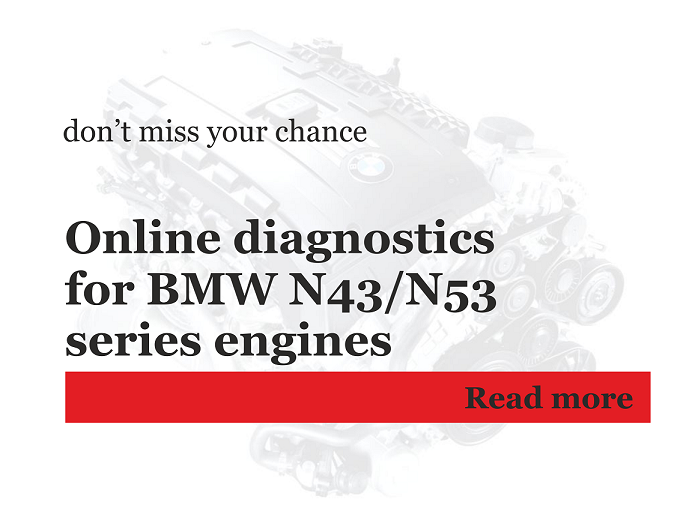